WHAT ARE THEY UP TO NOW? Featuring Peter Adam Salomon 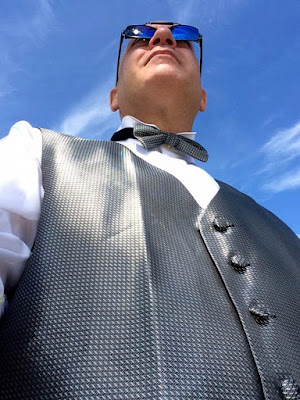 Technically I never even entered a contest or critique round. I had just ‘finished’ revising a YA Horror manuscript and was beginning to consider the whole ‘querying’ concept. I hadn’t even written a query letter at that point. All I had was a list of agents and agencies I was interested in and the thought that I should probably sit down and write a query letter.

While that was going on, there was a new MSFV contest but since I didn’t feel ready I figured it would be wiser to sit that one out and enter the next one.

Then, you unveiled the agent. Ammi-Joan Paquette of the Erin Murphy Literary Agency was at the top of my dream agent list. Unfortunately, they’re not open to submissions and, since I hadn’t entered, I’d just blown my chance to get my brand-new manuscript to her.

This is where I still sometimes think I’m dreaming. You posted a lovely note from your ‘Secret Agent’ that she was so impressed with the quality of your contestants that she’d open for submissions to anyone who put MSFV in the subject line.

I didn’t even have a query letter to send her. I just threw something together and emailed it as quickly as possible, thinking ‘so many people were going to email her that I’d better be quick.’ So, I basically didn’t even edit my query letter, just sent it off.

It might have then taken well over a year for that novel to sell, but Flux liked that query letter I threw together so much that seven years later it is still the blurb for the book on Amazon and other booksellers.

What a strange adventure. It has been a paradigm shift and life-altering in so many ways. I’ve had a poem performed on the BBC by the creative geniuses behind the music for Dr. Who. I’ve been nominated for a Bram Stoker award, the highest honor in my genre. I’ve mentored some brilliant teen writers and seen them experience their first taste of success in the industry. And I have made so many dear friends. It’s hard to believe, sometimes, that any of it is real.

I’ve had my oldest dreams come true. What more can I ask for?

There’s something amazing about being interviewed or signing autographs and all those trappings of being an author.

But, the teaching, mentoring, helping other writers? That’s where the magic is. This community of creative artists, striving together to make the world a better place, one person, one act, one word at a time. It’s an amazing thing to be a part of.

I’ve been mentoring teen writers for a few years now, after spending a couple years as a judge for different competitions and awards. That’s been the best part. When one of the teens I mentored made her first professional sale, that was pretty incredible.

The most difficult is the fact that everything starts all over again. All the waiting and revising and hoping and praying and dreaming that goes into that first sale also goes into the next one. And the one after that. I’m still waiting for that third sale, and the same doubts are there from the decades I spent as pre-published. I work all the time to remember how fortunate I am to have two novels and three poetry collections published in the last 5 years. And work just as hard, if not harder, on whatever comes next.

For poetry, 2017 saw the release of my third collection, PseudoPsalms: Sodom, which is available wherever poetry is sold (mainly Amazon since poetry isn’t exactly a best-selling kind of thing). Even after publishing two novels, I still think of myself as a poet first. I’ve been writing poetry since I was in elementary school, and only started writing fiction in college.

I also will be re-releasing my first poetry collection, PseudoPsalms: Prophets, soon, (also available on Amazon, etc) since the publisher went out of business making the collection go out-of-print.

Whenever I’m asked for words of wisdom I cringe inside. I’m just not so sure how wise I am. Then, being serious for a moment, I tell everyone the same thing: write, read, write some more, read some more. Then edit. Edit a lot. No, edit more.

But most of all: love the process. Love every single moment of it. Love the creative passion driving you to write. Love the drudgery of revision that you feel will never end. Love it no matter what.

So, you might as well learn to love the process. You’ll be doing it a lot.

Then write more. Read more. Revise more. And love it all.

Especially that moment your phone rings and you hear the best word in the English language: ‘Sold.’

You’ll love that moment the most.
Posted by Authoress at 9:07 AM