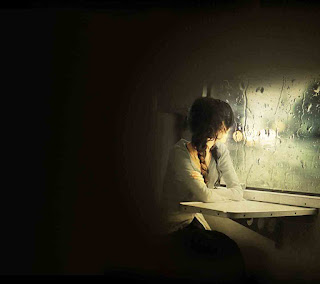 Yesterday at Whole Foods, I bumped into a friend of mine whom I don't see very often.  I'm really fond of this guy--he's warm, passionate, quirky, and he and his wife sell the most amazing food at our local farmer's market every Saturday.

I've known him for almost a decade.  We go to the same church, and I first met him when he sang in a special choir that I was asked to conduct one Easter.  The funny part was that, for several years afterward, I would pass him in the hallway, and he would say hello and call me by name--and I didn't know who he was.

Because let's be honest.  When you run a handful of rehearsals and a couple of performances for a group of thirty or so people, you don't exactly remember all their faces, let alone learn their names.  It was actually Mr. A who finally said to me, "He sang with us!"

After that, I made a concerted effort to remember my new friend's name, and the rest is history.  He's a peripheral friend, not someone in my closest circle of influence.  But I treasure him, because he's one of those people who always makes you feel like you matter.

Almost five years ago, when I first signed with my agent, he was especially encouraging and supportive.  Whenever I ran into him (which was often at Whole Foods), he would ask me how things were going with my writing.  As in, every time.  He was interested, and he knew it was important to me.  He's a creative type, too, so he "gets" that part of me.  He was rooting for me to sell that first book, to get things moving.

Of course, I never had anything exciting to tell him.  Still, he kept asking, and kept offering support.

Yesterday in Whole Foods, he didn't ask me.  I wasn't surprised, because he hadn't asked for quite some time.  In fact, it's a relief to not have to continue to say things like, "Oh, we've got another book out there right now, so I'm just waiting."

Such a relief.  Seriously.

But the absence is glaring.  This man always asked.  No matter what else we were talking about--no matter where we happened to see each other.  I could count on him to always touch base with me on my writing.  In his own way, he was walking along with me on my journey.  I deeply appreciated it.  But at this point, it's much easier--much less painful--that he doesn't ask.

He's not the only one.  As time has passed, other friends have fallen gently silent.  And why wouldn't they?  After a while, it becomes awkward to keep asking the same questions--and getting the same answers.

And this, folks, is the quiet valley through which you've got to push if you want to keep going.  There are no cheering crowds.  There's no one asking to interview you (those requests have died away, too), no one following you, no one insisting that you will get your break soon.  And the ugly truth is that they've stopped believing.  (And, because these are decent folks, they would never say that to you.)

Despite, perhaps, having stopped believing yourself.  Somewhere along the way, it stops being about the believing, and is only about the doing.  Writing because that's what you do.  Telling stories because they're in your soul, and you've worked so hard and so long to write them well, and others have confirmed that, yes, you actually have learned to turn a phrase or two, and, dad-gummit, you're not going to stop writing just because your dreams haven't come true.

Just because your dreams aren't even there anymore.

No.  It's way beyond dream-chasing.  It's set-your-jaw, sit down, take a deep breath, WRITE.  It's meeting folks you know and love, and not thinking twice when they don't ask you if you've sold anything.  (And if someone does ask about your writing? You don't have an emotional break-down.  And you don't feel like a failure, either.)

Mine was clearly never meant to be an exciting, holy-cow-her-agent-sold-the-triology-in-just-2-weeks! story.  That's not what I have to offer you.  And it's a good thing, because those fast-success stories aren't the norm.  We just hear about them a lot because, well, they're exciting.  And people vomit them out, and we slurp them up, and our spirits long for a similar story.

You get the idea.

The only way to keep going is to move past all that.  And if my role in all this is to be an example to you of what it means to JUST KEEP GOING, then I embrace that.  One of the things that has kept me going during the difficult times is remembering that you are watching me.  That you need me to carry the banner so that we can walk the walk together.

And one day, I'll bump into my sweet friend at Whole Foods or the farmer's market or church, and I will exclaim, "Guess what!" What a moment that will be.
Posted by Authoress at 9:05 AM