The Noble Princess, by Molly Boehme 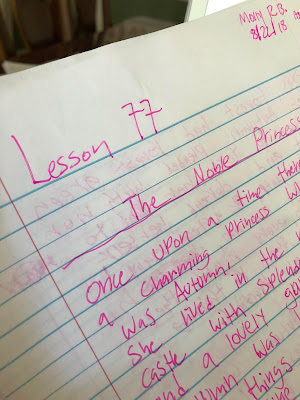 It's probably no surprise that I have some offspring who write. Many of you already know that my oldest daughter Maggie recently signed with Danielle Burby (we share an agent!). But it's my youngest's work I want to showcase today.

I'm not sharing this because of any special level of talent--there isn't one. Yes, she's bright and well read, but what I love about the story is the fact that she quite unwittingly wrote a badass YA heroine.  See for yourself:

Once upon a time, there lived a charming princess whose name was Autumn. She lived in the most beautiful castle with splendid rooms and a lovely garden.

Autumn was learning all the proper things a princess should know, like dancing and curtseying and many more graceful things. Autumn did not enjoy it, though, for secretly she wanted to fight with soldiers and lead battles--very surprising behavior for a princess.

One day she had a talk with her best friend--and brother, too--Forest. Forest was two years older than Autumn (who was sixteen). They both had raven black hair, and while Autumn had brown eyes, Forest had forest green eyes. Autumn pleaded with her brother to teach her to fight and defend herself, and reluctantly, after many tears from Autumn, he agreed. So every night they crept to the training chamber and practiced.

A year later, Autumn was doing her princess things when the alarm bell sounded. The castle was under attack! Her mother tried to usher her into the safe hiding spot, but Autumn pulled away and started running to her room. She pressed a hidden panel in the wall where she had been keeping her training armor and hurried to put it on.

The soldiers tried to stop her as she went running past them to the front doors, but she would not stop. With a battle cry, she launched herself at the leader of a giant army--the greatest and most feared leader of the seven seas. She stopped suddenly as she realized who she was facing, then charged. The soldiers, encouraged by her bravery, yelled and fought. What seemed like hours later the war was over. Autumn's kingdom had survived.

What I mostly want to point out is that I have never sat down and taught Molly how to write a strong female character.  She knows the premise of my upcoming novel, but I haven't allowed her to read it yet (she's not quite 11, so I'm making her wait; mom's prerogative). I'm sure my storyline of girl-dresses-as-boy-and-runs-away-to-the-army inspired Molly's story in some way (and she did steal one of my character names!).

I'd also like to think, though, that she unconsciously drew from her own life. She has two brothers, so in addition to growing up with dress-up and Barbies and ballet, she has also climbed trees, played "war" with her (mostly male) neighborhood friends, and learned to shoot an arrow with the miniature bow her hunter brother gave her one Christmas.

My favorite part of Molly's story? This: The soldiers, encouraged by her bravery, yelled and fought. Not only is our heroine strong and brave, but she ENCOURAGES OTHERS TO RISE TO THE MOMENT. A true leader!

In her little-girl way, Molly has touched on the beauty of a strong leading lady who isn't harsh or angry or trying to be something she isn't--she just knows what she wants, works hard, and then leads others to victory, going against everyone else's expectations of her.

I'm a proud mama. And yes, I did ask Molly's permission to post this today. She says she is honored. Good thing, because I'm honored to be her mom.

Thanks for indulging me. Here's to raising up the next generation of writers, one pink-inked, scribbly story at a time!
Posted by Authoress at 1:16 PM

Email ThisBlogThis!Share to TwitterShare to FacebookShare to Pinterest
Labels: Jillian Boehme, life of a writer, writing