When I wrote the first post for Miss Snark’s First Victim in April, 2008, this little pumpkin was taking up the majority of my time: 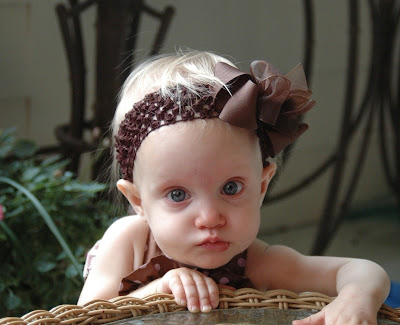 I'd already been writing for a while, but the lion's share of my time went to raising--and homeschooling--my kids.  One of the beauties of writing, though, is that it blends beautifully with motherhood.  And because I've always been hardcore about things like scheduled naps and consistent bedtimes, I could always carve writing into my days.  Even before my littlest was born, I had adopted the habit of hanging the following sign on my door when I was working:

MOMMY IS WRITING.  DO NOT DISTURB UNLESS SOMETHING IS ON FIRE OR SOMEONE IS BLEEDING FROM THE HEAD.

Yes, it worked.  (Boundaries are good.)

The blog, as I'm sure I've mentioned before, was a complete whim.  I had the sudden idea to start an anonymous blog for writers.  I was already 2 years into the querying process, and of course I had no idea--NO EARTHLY OR ALIEN IDEA--that my journey would go on and on...and on.  And on.

So I started the blog and jumped right in with our first ARE YOU HOOKED? CRITIQUE ROUND, followed by the inaugural SECRET AGENT CONTEST with the lovely Holly Root, who read through a whopping 114 entries without flinching--and this with wonky internet because she was somewhere in the wilderness.  After that, I knew I had to limit the number of entries (or I'd scare away any future agents).

One month after the contest, Eric -- a.k.a. Mr. A -- and I celebrated our 20th anniversary.  Which sort of felt like a big deal. 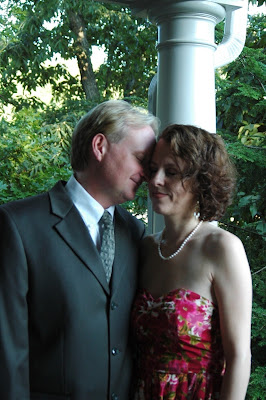 (This is actually an outtake.  I like it better than the smiling ones.)

By 2009, I was deep into my fourth novel.  It was a YA dystopian--which was interesting because I didn't even know what a dystopian was.  I just knew I had this vision for a bleak world I felt I had something to say about.

Eric (Mr. A) and I started spending a lot of time at Arrington Vineyards, Nashville's local winery owned by Kix Brooks (yes, that Kix), on "working dates".  During this phase of my writerly development, Eric was very involved in walking me through edits.  Basically, I'd give him chapters to read, and he'd make notes.

Mostly, though, he made fun of my bad dialogue.

I credit him with singlehandedly teaching me how to stop writing B-movie grade dialogue.  By using silly voices and accentuating the overwriting/melodrama/unnatural/stupid in my characters' speech, he gently trained me to listen to the words, to make sure they sounded the way normal people sound when they talk.

It's funny, because he's not a writer.  What he is, though, is a musician (with a great ear) and an avid movie fan.  He knows what bad acting/bad scriptwriting sounds like, so he transferred that insight to my manuscripts.

More than anything, he made me laugh.  And laughter is a far better teacher than criticism, yes?


It wasn't all work at the vineyards, of course.  It was wine and nibbles.  And smooches.

Naturally, smooches can sometimes lead to more-than-smooches, and in early autumn we found out we were expecting our sixth child.

I was thrilled, though, because our littlest was so many years behind the rest of our crew (my next-youngest child was eight when she was born), and I thought it would be lovely for her to have a sibling closer to her own age.  And so began another season of writing-while-pregnant.

Earlier that year (some time between the vineyard smooches and the discovery that I was pregnant), I experienced the shock of having my anonymity dismantled by a clever and sneaky sleuth.  Jodi Meadows and I met on Twitter and forged a fast writerly friendship.  Imagine how stunned I was when she announced one day that she was fairly certain she knew who I was.

My stomach dropped right through the floor.

Turns out I'd left a trail that she (or perhaps her superpower) was able to follow.  Basically, I'd clicked on a link she'd shared on Twitter, and she found the location of my IP address.  Then, because she knew I'd queried her twice (she was then reading submissions for an agent who is no longer an agent), she searched for the city and state and, using what she knew about my novel, found me.  (That is the short version. The actual sleuthing that went on was remarkable.  And a little scary.)

Jodi kept my secret without once wavering.  I'm forever grateful.

The second half of the year was filled with rejections that came singing into my inbox for the YA dystopian.  (Yes, I still have them.  Doesn't everyone save their rejection letters?)  I pressed on, slowing down perhaps as the first trimester sleepies hit, but continuing to write nonetheless.

That December, I hosted a Writerly Christmas Lyrics Contest, which made me feel a bit left out--so I wrote my own lyrics and posted them after the contest, along with a recording that my dear husband was kind enough to put together for me.  If you're an old-timer, you'll remember this.  If you haven't heard this before, well, enjoy!

Give me eggnog, rum, and cookies,
Save me from these writing rookies,
I've rejected forty-four
thousand and six, and maybe more."

"Contracts, royalties, and tears,
Fill the weeks and months and years.
Weary, now, I shut my door,
Screaming, as I go, 'NO MORE!'

Editors, I'm tired of waiting,
On my last nerve you've been grating.
Thanks to you, I soon will be
Paying for clients' therapy."

"Give me sand and surf and sun,
I'm in desperate need of fun.
Farewell partial, full, and ARC,
I have had my fill of snark.

Lock the door and turn the light off;
Can't remember my last night off.
Toss the books and pass the gin!
Let the holiday begin!"

The fun we had recording that silly little song was tempered by the fact that, at 11 weeks along, I had started spotting.  I spent untold days scouring the Internet for articles on "when spotting is normal", and crying out to God for the safety of my baby.  All while transitioning into maternity clothes and baking my final batches of Christmas cookies.

But as Christmas Eve day progressed, I worried that my worst fears would come true.