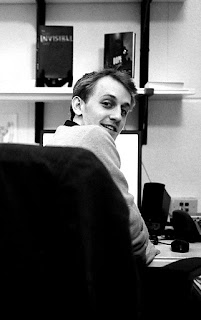 A round of applause for the delightful Stephen Barr of Writer's House for being our first Secret Agent of the year!

I spent the first 21 years of my life in Southern California, and the only thing I really knew about publishing before I moved to New York City was Robert Downey Jr’s portrayal of Terry Crabtree in Wonder Boys—he’s an editor, and he flies into Pittsburgh (wearing a big, comfy looking east coast coat) to coax a second novel out of his troubled but probably brilliant author, and then come the hijinks. That sounded pretty swell to me, so I read Wonder Boys on the flight over to New York, and over the course of six or seven months of interviews and internships, I realized that I still wanted the coat and the authors, but would be more comfortable playing the role (so to speak) of their agent (though editing is perhaps my favorite thing in the whole wide world, and I work very closely with my clients to polish and perfect their manuscripts before and after submission). I landed at Writers House in 2008, became its biggest fan about four seconds later, started taking on my own clients in 2010, and just got my coat back from the dry cleaner.

WHAT I’M LOOKING FOR:

At the moment, I’ve got a particular hankering for unexpected memoirs with itchy voices, narrative non-fiction that tackles hard-to-tackle issues, wry (but still sentimental) YA and middle grade, sweet and wacky (but still logical) picture books from innovative authors who illustrate their own work, and any fiction that rewards the reader line-by-line and gets to know at least one character really, really well (including literary page turners, mysteries that bend reality, ghost stories that blow reality to hell, and humor that's more than just an infinitely repeated gag in sheep's clothing).

~ ~
Thank you, Stephen!  Winners forthcoming.
Posted by Authoress at 8:30 AM