Tuesday seems to be the day lately, yes? It's a good thing I've been slogging my way through my emails-marked-success-story, because I TOTALLY neglected to post this one a few months ago.

Losing track of success stories is a good problem to have, right?  At any rate, Alice's name is already included on the "published author" success page, but her story has yet to be told.  Here it is, in her own words: 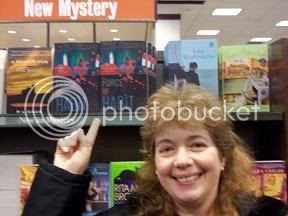 Back in November 2008, I won the SA contest for Colleen Lindsay. She spent half an hour on the phone with me, enumerating the strengths and weaknesses of that manuscript. Great advice, which I applied as I continued the querying process. Fast-forward to April 2010, when in a 6-day flurry of emails and phone calls, I signed with Kent. D. Wolf of Global Literary Management. (With a different book.)


Fast-forward to January 26, 2011. This is me, in my hometown Barnes & Noble, pointing to my book on their shelf under the “New Mystery” sign. The journey took four years, three books, 185 agent rejections, one “yes” from an awesome agent, a handful of editor passes, and one offer from a terrific publisher (Midnight Ink).


Never give up! Never surrender!

(Force of Habit in stores now from Midnight Ink)
Posted by Authoress at 8:42 AM