A New Hat For Authoress?

It's funny how the red hat has become my trademark.  I never intended it to; I didn't plan to have a "trademark" at all.

When I did the photo shoot for my avatar, I was trying to create an elegant sort of mystique.  You know, the gal in the sparkly black dress and big, red hat, whose face we cannot see.  Ah, but we know she's a writer because look at the fat manuscript in her arm!  And the telltale quill.

The truth is, despite its very adorable backstory (which I won't get into), I hate the hat.  I wouldn't be caught dead in public in feathers, and I don't wear red well at all.  The hat is fun and flamboyant, but it isn't "me".

I don't want to get rid of it altogether, but I definitely want to update myself.  And this is the hat I bought at the shore; a hat I actually wear and love: 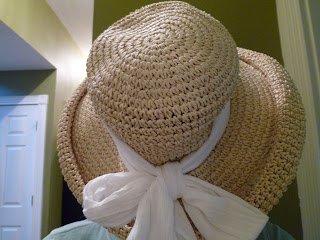 So, what do you think?  Should I, at the very least, have a Seasonal Authoress Who Wears This Hat During the Summer?  (Disclaimer: I am well aware that this is a horrible picture.  I took it myself while holding the camera in front of a mirror so I could see the reflection of the view screen.  Moving things left in order to make them move right is not my forte.)

Not that any of this is a big deal.  I'm just heartily tired of seeing myself in the red hat every time I pop onto the blog.  Though, truly, Josh looks much cuter in it than I do. 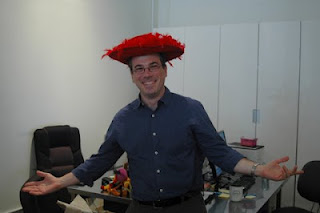 So humor me.  What are your thoughts on The New Hat?  (Because, naturally, I need another distraction whilst slogging through these revisions.  Right?)

Posted by Authoress at 8:34 AM