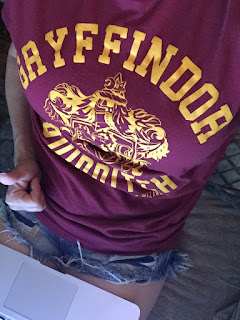 So, a few days ago, I was sorted into Gryffindor on Pottermore.  And I sort of cheated.

Well, it's not like you can actually cheat on something like that.  But I knew I wanted to be in Gryffindor, so I tried to answer the questions in such a way that, well, I'd end up where I wanted.

Truthfully, most of the answers I chose were truly my very own choices.  But there was one question in particular that I absolutely, positively chose the answer because it sounded distinctly Gryffindor.  Something about "which drink would you choose".  And there was this wonderful, thick-and-creamy drink that I totally would have chosen, if it weren't for the fact that I was dead set on getting into Gryffindor.  So I chose the golden-drink-so-bright-you-could-hardly-look-at-it (or something like that), because it absolutely sounded like something Harry would have reached for.

I'm nothing if not determined.

And here's the rest of the story.  A few years ago, I popped onto Pottermore with high hopes, and ended up in Ravenclaw.  Which, yanno, is probably a good fit for me, all things considered. But, come on.  Nothing exciting ever happens in Ravenclaw.

So, yeah.  I was a sore loser and left Pottermore without a backward glance.  Then, this past weekend, I found the Gryffindor tee at Target (in the men's section, because apparently men get to wear all the cool licensed tee shirts), grabbed it, and gave Pottermore another try.

Why does any of this matter?

It doesn't, really.  It's just that I'm currently rereading all the Harry Potter, because it's been many years, and because, now that I've grown so much as a writer, I wanted to read it more critically, to see if I could determine how, exactly, she makes the magic.

Know what?  It's all about the story.  Because--brace yourself--I don't like her writing much.  At all.

She has created lovable, enduring characters. She has crafted a world so palpable and whimsical and fiercely imaginative that one simply has to step inside it and stay for awhile.  She has captured (in the early books) the kind of humor that is perfectly kid-sized, while imbuing it with the kind of dry wit that keeps older readers reading.

But the writing itself?  Ugh.  Not so much.

For one thing, her point of view is all over the place.  There's all this "meanwhile, Ron and Hermione sat with Hagrid" while Harry is getting ready for his first Quidditch match, and constant head-jumping in scenes that should be clearly and firmly in Harry's head.  She has written in a style that is, well, older.  The kind of thing that no editor today would buy.  Today, it's so much about a close first- or third-person POV, that anything outside of that really does feel "old".

Worse that the point of view thing, though, is THE COMMA ERRORS.  Sentence after sentence after sentence with a comma splice.  A deplorable lack of emdashes and semicolons and happily independent clauses, which have all been replaced by errant commas.  The author has made an art form of the run-on sentence.

I give you this gem from page 221 in Harry Potter and the Sorceror's Stone:

The idea of overtaking Slytherin in the house championship was wonderful, no one had done it for seven years, but would they be allowed to, with such a biased referee?

This sentence makes my vital organs want to propel themselves out of my mouth.  This...this is the stuff of ninth grade book reports.  It's just WRONG.  Utterly and completely wrong.
Don't even try to talk me into thinking that there's anything grammatically acceptable about the above sentence.

So, what am I saying here?

J.K. Rowling has given us SOMETHING, and I'm not sure it's definable.  It's just...brilliant.  Magical.

No matter whether or not you like the Harry Potter books, you can't deny the SOMETHING.

I don't aspire to write like Ms. Rowling.  But I do aspire to breathe into my own stories their own, particular SOMETHING.  And I'm sure you're doing the same thing.

It's hard to aspire to something undefinable, though.  Right?

And Mr. A just sort of rolls his eyes at me when I'm wearing my Gryffindor tee and doesn't get the whole Harry Potter thing (because he's never read the books).  It's just that there's something in me going, "Well done, Ms. Rowling.  You've creating a THING from deep inside your brain, and it's become as close to real as something from the pages of a book possible could.  You've ROCKED this story-telling thing!"  And then I feel all bookish and nerdy, and life is good.

And then I want to curl up with my own story, my own world, my own brain, and have at it.  Because, no matter what you're writing or whether you're published or not, IT'S ALL MAGICAL.  I think that, in the end, that's what keeps us coming back.  It's not the grammar or the wordcount or the mechanics of getting those words down in a less than insane order.  It's about CREATING OUR OWN SORT OF MAGIC.  A world from deep inside us that becomes real.

Heady stuff.  And a bit geeky.

I love stories.  I love being a writer.  I love sharing my thoughts with you, because YOU GET IT.  We're fashioned from the same lump of clay, and I LOVE THAT.

Go on.  Grab your Gryffindor tee shirt this weekend, before they sell out.  Tell them Authoress sent you.  :)