When Language and Art Collide

You may or may not know that I also pen the odd rhyming children's book. Yes, I'm geeked about kidlit from wee to teen. So naturally I read at both ends of the spectrum.

And one thing I ADORE in a picture book is luscious artwork. I'm not all over the cutesy stuff--bright colors, simple shapes. I'm not even excited about Eric Carle's illustrations, though I'll admit his are some of the most delightful picture books out there. But give me a masterpiece on each page, and I'm a goner.

Unless the writing doesn't measure up.

I give you the following: 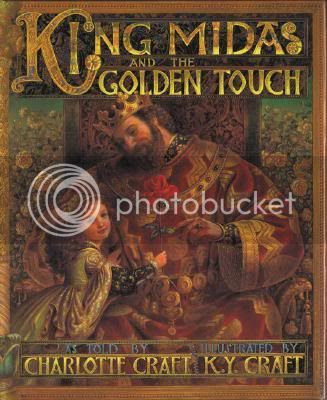 One look at that gorgeous cover lets you know what to expect on every page: SUMPTUOUS paintings. EXQUISITE detail. This retelling of a classic fable is a feast for the eyes--the kind of artwork you want to stroke with your fingertips. Brilliant.

And then you start reading.

Mind you, it's not awful. And there's a certain "fairy tale" language inherent in this type of tale that has a cadence all its own, different from the modern tales to which our ears may be accustomed.

It's adequate for the genre. But it's not excellent. And compared to the gorgeous artwork, it's sadly lacking.

(I know, I know. I'm an absolute language snob. But I'm also a hardworking writer who is continually striving to strip her own work of the kind of writerly slip-ups I've found in King Midas.)

"That is your wish?"

"Yes, for then it would always be at my fingertips," Midas assured him.

"Yes," replied Midas. "The golden touch would bring me all the happiness I need."

Assured? Cautioned? Replied? Read the passage out loud (the only way to truly determine the merit of a picture book, in my opinion). Does it feel as clunky to you as it does to me?

With a gift as great as this, he thought, no inconvenience could be too great.

But Midas began to wring his hands. If he was hungry now, he imagined how much more hungry he would be by dinner.

As the water washed the gold from his clothes, he noticed a pretty little violet growing wild along the banks and gently brushed his finger against it. When he saw that the delicate purple flower continued to bend with the breeze, he was overjoyed.

The above passage is about as purple as they come (no pun intended). It's a wonderful moment for King Midas, realizing that the cursed touch has been washed away. But all those adjectives! Read it out loud a couple times. It's exhausting.

Now, I'm not picking on this book simply to be snarky. There is a lot that is beautiful about it (mostly the artwork). I really do have a non-snarky point to make: Regardless of genre or age level, writing should be clean and beautiful. And grammatically correct. If tiny ears grow up hearing gorgeous prose and NOT overwritten fable re-tellings, they will not settle for less when they are older.

And let's give the parents a break, too. Who wants to read an exhausting fairy tale twelve times a day? The text should slip golden from the tongue, melting in the mouth like fine chocolate. If it makes mama tired, the pleasure is gone.

Of course we, as writers, tend to be overly sensitive to the weaknesses of published works. And I don't think there is any such thing as a PERFECT book. (Well, unless Jane Austen wrote it. But she DOES use the oddest spellings!) We've got to extend grace as well as give ourselves some.

But when less-than-stellar writing is paired with illustrations that take my breath away, I am compelled to say something. And so I have. At any rate, I'm always open to your opinions. The book is available with "search inside" on Amazon. If you want to read a few pages and give me your thoughts, I'd love to hear them. If I'm totally off, I know you'll tell me.

After all, this could be nothing more than my perfectionist tendencies rearing their ugly head.

I do love a good fairy tale, at any rate. And I'm thankful that Harper Collins has published this (and others in the same collection) along with more contemporary offerings. Now if everyone would work together to make something GOOD into something WONDERFUL, what a world it would be!
Posted by Authoress at 9:52 AM